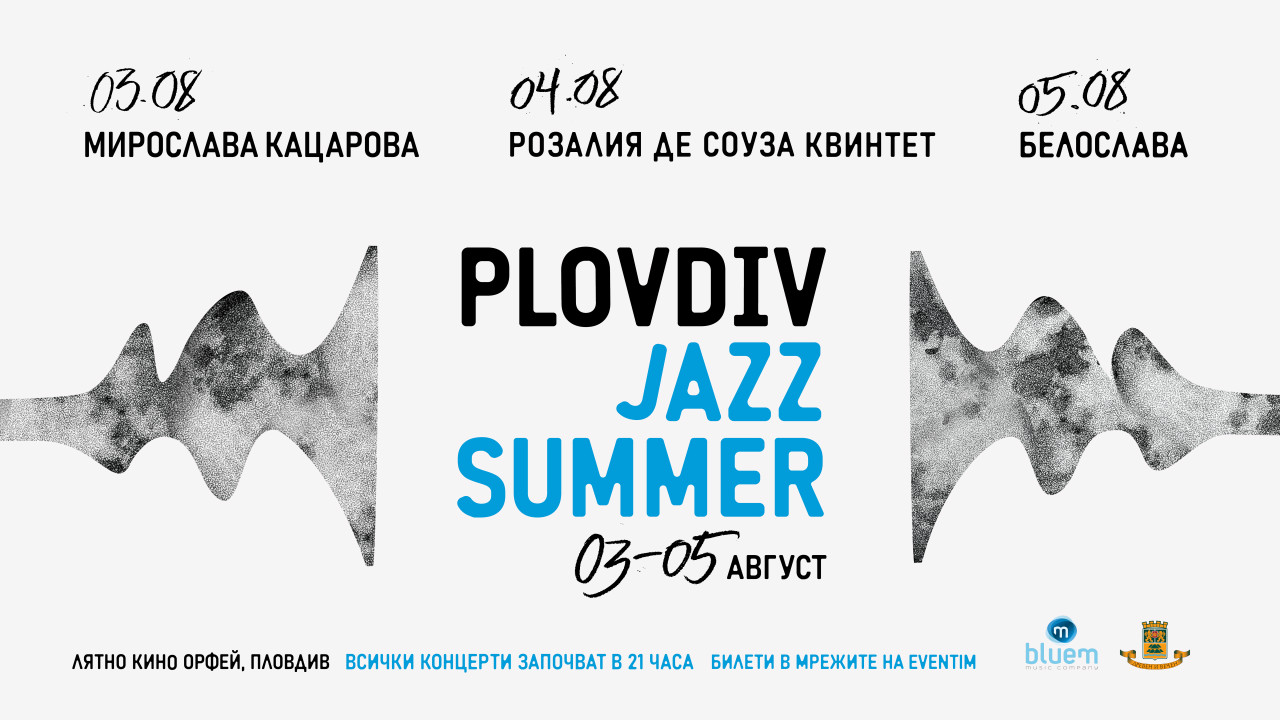 Only two weeks remain until the first edition of Plovdiv Jazz Summer, which will frame the beginning and end of August. Between August 3 and 5, the festival starts at Summer Cinema "Orpheus" in Plovdiv - every evening at 9:00 p.m., and from August 26 to 28 it will continue in the village of Markovo, which is located near Plovdiv.

Miroslava Katsarova's concert "The Long Shadows of August" will start on August 3. The jazz singer will be on stage together with pianist Miroslav Turiyski and drummer Mladen Dimitrov. This year, the three musicians celebrate 10 years since the beginning of their joint creative work. The title of the concert "Long Shadows of August" is actually the trio's newest song. It was created for the music of Miroslav Turiyski and Mira Katsarova. The author of the text is the poetess Ina Ivanova. During the concert, this summer musical impression will be presented to the public for the first time. The poetic and dream-like atmosphere in it is further emphasized by electronically generated sounds, as well as by Miroslava Katsarova's expressive, slightly drawn-out vocal phrasing, distinctive for her singing style. The song will be distributed within days on most online and streaming platforms.

During the concert, another song will be premiered, this time it is by Mr. Moon (Mladen Dimitrov) feat. Miroslava Katsarova, and its title is "Miracles". All songs in the concert program will be in Bulgarian.

On August 4, Rosalia de Souza arrives for the summer program of Plovdiv Jazz Summer. For the first time, the Brazilian singer visited Bulgaria for the creation of the Plovdiv Jazz Fest in 2015. This year, again with her participation, the summer edition of the festival will also be launched. Rosalia de Souza arrives with her quartet and will present her latest album Inspirada, released in March of this year 2022. Born in Rio de Janeiro, she went to Italy where she received her education. Today she lives and works in Rome, and the culture of both countries is a strong determinant of her music. Rosalia de Souza gained great popularity for her work with the Milanese composer, DJ, and producer Nicola Conte. Her aesthetic is marked by nostalgic references to Brazilian bossa nova and music from old European black-and-white films.

The last concert from this part of the program will be Beloslava's. On August 5, the singer will celebrate 22 years on stage with the Plovdiv audience. Beloslava will immerse us in the beautiful and loving atmosphere of her music together with artists such as Zhivko Petrov, Dimitar Semov and Rosen Zahariev-Roko.

Between August 26 and 28, the festival will continue, this time in the village of Markovo. Among the participants in the program will be Teodosii Spasov, Dimitar L'olev and his quartet, Dani Belcheva, Milen Kukosharov, Misho Ivanov, Dimitar Semov and others.

Tickets for the first Plovdiv Jazz Summer concerts are now on sale in the Eventim network.

Apart from them, a limited number of festival tickets are also on sale, which include all concerts from the program between August 3 and 5 at Plovdiv Summer Fest.

Plovdiv Jazz Fest and Plovdiv Jazz Summer are organized by Blue M. The event is held with the support of the Municipality of Plovdiv and is part of the Cultural Calendar for 2022.